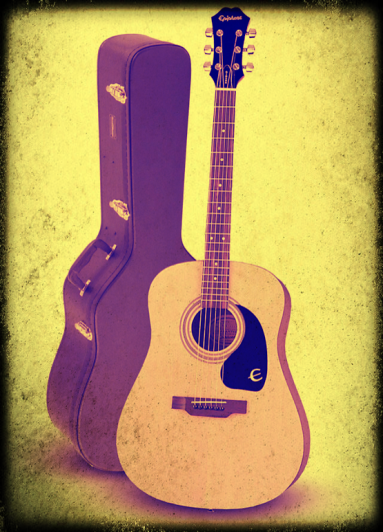 My first guitar was a toy, a Hanukkah gift, and a rather unintentionally cruel one, come to think of it. It was about 3/4 the size of a real guitar, somewhat reminiscent of the Glam Rock era Gibson Goldtop Les Paul, with fake plastic strings that could never approximate anything akin to music. And so the only purpose it served initially was to remind me that I didn’t own the real thing, reducing me to a pathetic state of fantasy, posing in front of a mirror as The Who blasted out of the cheap speakers of my stereo, swinging my arm in Pete Townshend’s signature windmill motion, and of course, for maximum humiliation, I was occasionally in mid-windmill when my parents barged into my room, yelling at me to turn the volume down.

Finally, during my freshman year of college, despite a near immediate problem with fiscal discipline, I somehow managed to save up for and buy my first real guitar. By then, I’d discovered the acoustic side of Rock ‘N’ Roll music, I’d been given the advice to start with an acoustic guitar, and so I brought home a bottom-of-the-line Epiphone dreadnought, with plywood spruce top and plywood mahogany back and sides. It was cheap, less than $200, which included a hard-shell case, but it was a real instrument and a low-risk investment into a hobby that could crash and burn in weeks or a few months. Armed with Bob Dylan, Neil Young, and Beatles songbooks, the ones with the chord diagrams showing where to put your fingers, I slowly but surely taught myself how to strum the basic chords needed to accompany my singing. I even twisted a wire clothes hanger into a device that could hold a harmonica to my mouth as I played, a la Bob and Neil.

Progress was slow, plateauing sometimes for a year or so at a time, but even during the plateaus I could at the very least play hundreds of songs well enough to sing over my own accompaniment for my own enjoyment, and just as often for my own life-preserving therapeutic purposes. 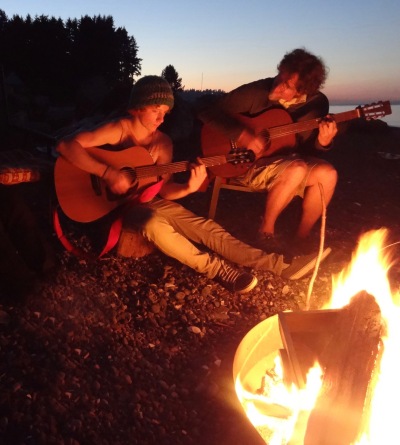 My favorite photograph of my son and me was taken in the summer of 2014, on the beach at my in-laws’ property on Vashon Island, which lies just off the coast of Seattle.

Vashon is a special place. The family has lived there off and on for generations, down through which a loving connection to The Rock, as locals refer to the island, was passed. My wife was born on the Vashon ferry, in the back seat of the family car, and ever since she was a kid they visited each summer.

Julian was always an exuberant child, but whenever we boarded the ferry for Vashon his excitement and joy spiked immediately, and he’d run directly to the outside deck to look out on Puget Sound and the island we were sailing to. It was a delight to observe and to be along for the ride with him.

That spring, after 30 years with my entry-level Epiphone, I acquired my first higher-end guitar, an all-mahogany Martin 000-15s, at which time I formally gifted my starter guitar to Julian. He’d already been picking it up and playing it often, and just like his dad he quickly taught himself some chords and a few songs that he liked. Unlike his dad, however, he picked up the basics MUCH quicker, and nearly as soon as he could string a handful of chords together he started writing his own songs, something I was never able to do. Later, he’d show the same inclination on the piano, improvising and composing his own music. But, it was apparent right away that he was a natural, and very few fathering efforts I made over the years felt as natural and fulfilling as giving him my old guitar.

That summer, one perfect evening at sunset, beside a firepit on the Vashon beach, Julian and I played guitars together, and, well, life just doesn’t get much better than that.

Those who persevere on the guitar despite the initial struggle with the fine motor skills required, well, obviously, not all become Rock stars. But on weekends, stressed out from the rigors of the rat race, the guitar is there to either self-soothe with some Simon & Garfunkel or Cat Stevens, or to vent frustration and anger with The Who or The Clash.

Those who persevere further still — who learn just enough to begin playing with other Devotees wanting to free their inner Musicians — find quickly that this is when the enjoyment grows exponentially, when the thrill of instruments and voices come together to become one thing, a song that you love and that has meant SO much to you over the years, a song that you are now participating in rather than just listening to.

This! This is a whole other level!