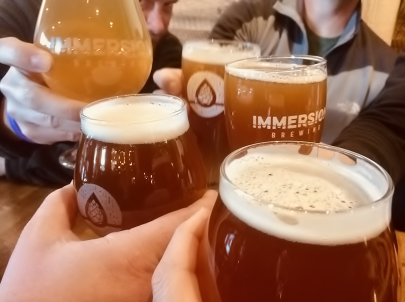 As mentioned in Chapter 31, given that ALS is not typically associated with a lot of physical pain, it could be seen as ironic that I would voluntarily endure the by-no-means-trivial amount physical pain involved in getting a tattoo.

Also, though the quote oft attributed to Einstein — “The definition of insanity is doing the same thing over and over again and expecting a different result.“ — has long been proven apocryphal, you could say I was stark raving mad to get another tattoo after experiencing the pain of the first.

However, there are a few things that make pain bearable, and one of them is:

It can easily be said that, when it comes to friends, I have led a charmed life.

I was always friendly with a wide circle at school, or years later at work, but that ever-important best friend, and the equally important inner circle of my closest friends, have been incalculably precious to me. These were friends who most immediately reminded me that I was not alone, or sometimes that I was not crazy, who were often going through the same life-stage struggles as I was, or in the case of musician friends, felt music to the same extraordinary extent as I did.

Rewinding many years, I was fortunate to have two groups of friends who spanned four decades of my life; friends who led me across the country, others who welcomed me to Bellingham, Washington, and most of whom I’m still close to despite, in some cases, the miles between us.

The summer before I entered junior high school, my next-door neighbor and inseparable best friend, moved away. I was due to start at a much bigger school, with many more kids, and so I experienced no trivial amount of anxiety. I made an interim friend right away, but three years later I was off to high school, a still bigger school, and I recall once again worrying about what social circle I might end up in.

In my sophomore year, however, I survived Biology thanks to a friendship that developed between me and a certain Michael Kramer. Mike lived in a neighborhood called Greentree, separated from my neighborhood by a fairly busy street called Summerhill Road. He invited me to his house one day, and legend has it that my mother was VERY concerned about me crossing Summerhill on my own, something I’ve now been teased about for years. I’d almost say brutally teased, but if there was any rule in Mike’s already existing Greentree friend group it was that teasing was ok because everyone was equally welcome to dish it out as well as take it.

Together, we compensated for living in a very boring town by having some of our earliest experiences with alcohol, as mentioned in Chapter 8 we obsessively listened to music, we took our first independent trips into the wonderland that is New York City. We graduated high school, some of us went off to Rutgers together, others went to different schools. Mike, Keith and I moved to Los Angeles together, Judy moved to San Diego, Dan to San Francisco, Stu landed in Arizona, Al moved to Florida, Rob to Colorado, Rick moved to a beautiful part of North Jersey, and Kathy found an island on the Maine coast. Despite the many miles and years, we’ve stayed close and have reunions from time to time.

1988-1989, I knew within my first year living in Los Angeles that it wasn’t a good fit for me. Though there was no shortage of fun to be had there, mostly it was the size of the city that I found difficult to deal with. I just never felt at home there. But, Mike, Keith and I were so close, we’d been through so much together, and I really liked my work as a case worker for the developmentally disabled and their families.

Leaving, as I began to imagine it, would be a little scary, as I’d be truly out on my own in the world for the first time. Starting junior and senior high school seemed a breeze in comparison.

Two years, three, four years passed…the longer I stayed the harder it was to consider leaving. Keith was actually the first to leave, heading to northern California first and then back east to New York, and then, in 1993, I summoned the courage to cut the umbilical.

The how and why of Bellingham is a long story. Suffice to say, it had something to do with Jack Kerouac’s Dharma Bums, hiking boots, towering evergreen trees, the Salish Sea, the San Juan Islands, and the Cascade Mountains. I fell in love with the place on my first scouting trip here — after the interstate runs through the farm land of Skagit Valley, it begins to wind through forested foothills, then along picturesque Lake Samish, and just before the first glimpses of the small city of 80,000 people appear, there’s a sign that says, “Bellingham next 7 exits.” Nearly immediately, I felt I’d come home.

I acquired a decent job — case worker at the community counseling and psychiatric clinic — doing very difficult work with the chronically mentally ill, a job that was tolerable on the merits of being of service to those in need, but I also worked with a staff of case workers who made me feel instantly welcome and part of the team.

At the clinic I made friends that I still have 25+ years later, it was there I met my wife, who was doing her internship for her Masters degree in counseling, and most pertinently, that first summer, at the clinic staff picnic, I met a guy named Dennis Dashiell, who would become my best friend in Bellingham, my drinking buddy, my confidant, and a co-founder of…

I know there can be a dark side to the romantic image of the neighborhood watering hole — addiction, neglect of family, brawls, etc. — but then I’m an unapologetic romantic and this tradition is special to me. Oh, the pleasure I get from unwinding with friends over glasses of well-crafted fermented grain beverages, surrounded by others, likewise enjoying themselves or comforting one another. For me it’s very little to do with intoxication and everything to do with community, that enduring antidote to the kind of isolation humans are prone to, especially in this age of the internet.

Some years ago, I saw a British film, The Match, set in a quintessential charming little village, where the two local pubs have a fierce rivalry, including the waging of a nearly 100-year old annual soccer match. It was a fun if mostly forgettable film, but the scenes in the underdog pub hit all the right notes, capturing the camaraderie and the central importance the establishment has for its patrons, with one character referring to it as the village’s living room.

Unlike the lads in The Match and dozens of movies like it, I never bellied up to the bar on a daily basis, but one night, years ago, I mentioned to the guys I cavort with in the pubs that back east, in New Jersey where I grew up, there were these things called Coffee Klatches, small-to-medium groups of people who gather at diners to drink coffee and chat, and so I proposed that we name ourselves — this collection of odds and ends guys who’d all found each other somehow, with the uniting pleasure of havin’ pints down at the pub: The Beer Klatch, or The Klatch for short.

The motion passed without a dissenting opinion, and The Klatch was born!

The Klatch roster was never set in stone, and Klatch meetings were scheduled based on loosely identifying a time that worked out for as many of the guys as possible. Friends of friends were welcome, spouses were known to attend from time to time, and for a number of years we inexplicably stopped calling ourselves The Klatch.

What has endured, however: many, many memories. Pub hopping, yes, but also movies and baseball games, BBQs and concerts, hiking and camping trips, birthdays and anniversaries.

I had lunch a few days after the magic mushroom journey with Dennis, I told him all of the juicy details, and a few days later I got an unexpected text message from him:

In one of the earliest memories I have of my friend Dennis Dashiell, he told me about a class he’d taken in college, Phenomenology, and about how, ever since, whenever he sees crows or ravens nearby, he senses that their presence holds some kind of meaning for him.

A very brief googling suggests that, throughout human history, in mythologies, folklore and cultures all across the planet, crows and ravens, like owls, have held deeply rich symbolic meaning, even overlapping meaning with owls, including various allusions to death.

And so, when Dennis says he’s getting raven tattoos, I know immediately that this is not some silly whim for him. As of my ALS diagnosis, I share with Dennis a kind of relationship to death that I do not share with anyone else: I’m slowly losing everything that I hold dear at the hands of a terminal illness for which there is no effective treatment or cure; and Dennis lost one of his precious daughters in a tragic car accident.

Yeah, getting tattoos is painful.

Life can be painful.

All of the Klatch members in the photo above stopped by the tattoo parlor while Dennis and I went through this particular bout of pain together.

Friends are an effective salve.