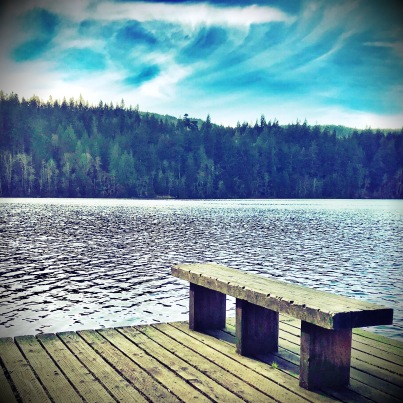 As powerful and cleansing as the music and the owl synchronicities were, I was only about halfway through the 5-hour trip, and it turned out that fear was not done with me yet.

The transition from that place of bliss, back to the dark place, happened with no more than the occurrence of a single thought. I had been lovingly thinking about my son one moment, and in the next I remembered that I only had a few years left with him.

ALS had a knack for leading me in that direction.

Whether my mind, fresh off the owl revelations, manufactured the setting of my next journey – a dark forest, not dense like those in my adopted home in the Pacific Northwest, but more like the sparse deciduous woods of my childhood in the Northeast – or, the owl had guided me in that direction, I honestly have no idea. Nor do I think it matters at all. I was there regardless, despite the fact that my body was sitting in a house in lower British Columbia. I had no map. I was alone. The moon disappeared behind clouds periodically. I wandered slowly, periodically scanning the tree branches for an owl; that nocturnal bird that navigates in the dark.

This would be the deepest dive yet into the abyss. For much of the time I was paralyzed by fear, my breathing was frighteningly shallow, bordering on non-existent. My body felt icy cold, but my head was hot, and I was sweating profusely. I periodically opened my eyes in hopes of a reprieve, as if that would somehow override the psilocybin, only to discover that my fear didn’t reside in that dark forest, and rather, I carried it inside me, and my task remained to not back down from it.

Sarah would be there by my side the entire time, holding the space, a kind of sacred act of service. She never manipulated the experience or steered its course in any way. All of her interjections were mindful offerings of comfort and support, allowing the journey to unfold naturally. The mushroom medicine, the music, the poetry, the waving of the owl feather, the gentle beat of the drum, the holding of my hand, amounted to a gentle giant river carrying me along.

At one point, she told me a brief story, a Hindu parable she gleaned from a book by Mark Nepo, titled The Book of Awakening: Having the Life You Want by Being Present to the Life You Have:

A Hindu master grew tired of his apprentice complaining all the time.

The master instructed the unhappy young man to put a handful of salt in a glass of water and then to drink it.

“How does it taste?” the master asked.

The master chuckled and then asked the young man to take the same handful of salt and put it in the lake. The two walked in silence to the nearby lake, and once the apprentice swirled his handful of salt in the water, the old man said, “Now drink from the lake.”

As the water dripped down the young man’s chin, the master asked, “How does it taste?”

“Do you taste the salt?” asked the master.

At this, the master sat beside this serious young man who so reminded him of himself and took his hands, offering, “The pain of life is pure salt; no more, no less. The amount of pain in life remains the same, exactly the same. But the amount of bitterness we taste depends on the container we put the pain in. So when you are in pain, the only thing you can do is to enlarge your sense of things… Stop being a glass. Become a lake.”

While the story did not bring immediate relief, it did somehow penetrate the fear. I was able to hear and consider it. I was able to visualize a lake a mere quarter mile from our home, a lake that had been like a good friend for over 25 years. We swam across it on hot summer days, circumnavigated it by foot and bicycle, and walked across its frozen surface in the winter. We processed our life together there. We laughed and argued and tried to strategize our parenting. Julian took early, wobbly steps on the lake trail, played with abandon at the playground, and built a rope swing for warm weather plunges.

If I was to become a lake, it would be this lake. And I tried. I really tried. Longingly. Even verbally, repeating over and over, “I am a lake. I am a lake.”

Gradually, the fear did dilute in the lake. And in the stillness that I eventually arrived in, after emerging from the dark forest intact, a little worse for wear, I once again felt that feeling of being wide-open and emptied of a tremendous weight of burden.

I was primed and ready for another infusion of love and beauty, but first…