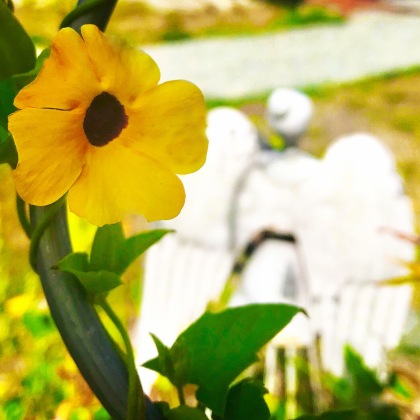 From the Stages of Grief, In No Particular Order

When four grams of psilocybin mushrooms kicked in, accompanied by the awareness that I’d be tripping for five hours and had only just started, I was like George Bailey in It’s A Wonderful Life, standing on that bridge over the Bedford River, snow absolutely dumping down, his coat lost sometime during his panic over the missing $8,000, he was at the very end of his rope, and he admits:

God, dear Father in heaven, I’m not a praying man, but…

Or, more succinctly, like General Patton’s atheist in a foxhole, something approximating a prayer did occur to me.

The story of my relationship with religion is a long and complicated one, best briefly summarized. I was raised in a very secular Jewish home, and yet forced to attend Hebrew School at a Conservative synagogue, where at, 11-12 years of age, totally incapable of handling such information – 6 million slaughtered, Night by Elie Wiesel, film footage of the concentration camps, the mass graves, the bodies stacked like wood, the gas chambers, the ovens – the trauma of The Holocaust was passed on to me, no one there to hold me and ask me how this made me feel, no one with any answers whatsoever to the painfully obvious question: If there’s a god, how could he let this happen? At least, no answer that made any sense at all to me.

So, I hadn’t ever really believed in a god up to that point, hadn’t been all that thrilled with the stories in the Torah of a sadistic blowhard whose flood was the first genocide, who played the ugliest trick imaginable on Abraham, sparing Isaac only at the very last minute, who brought Moses and plagues and the Red Sea to free the Israelites from slavery, but was nowhere to be found during World War II.

Yeah, this god business was not for me.

And yet, despite how cynical that all might sound, I knew in my heart, starting at an even earlier age, that there was more to the natural world, more to the cosmos, than meets the eye. I recall summer days, at something like 8-10 years of age, at my uncle’s cabin in rural Vermont, sitting by a small trout stream about a hundred yards into the woods, all by myself, feeling a kind of peace and belonging that was normally drowned out by, as Thoreau called it, all that was not life. Despite growing up in a New Jersey suburb, in an area that had been farmland, leveled to make way for housing developments and strip malls, by some stroke of luck our backyard abutted an oasis, a patch of trees known as Frost Woods, for I lived on Frost Avenue, and our house was across the street from Robert Frost Elementary School, my alma mater.

I was born on the road less traveled by, I’ve gotten lost numerous times, for as much as a year at a time, heck, I even, for a moment, bargained with a god that I don’t believe in, when, given my terminal illness, I turned to face the fear head on, determined to not back down.